decision analysis partners was tasked by the Department of State with the planning and execution of its 10th International Export Control Conference in Istanbul, Turkey, June 25-27 2009. 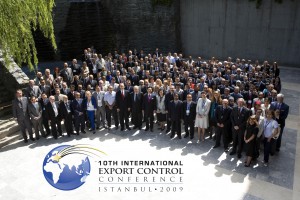 The U.S. Government’s Export Control and Related Border Security (EXBS) Program’s objective is to stem the proliferation of weapons of mass destruction and their delivery systems, and prevent irresponsible transfers of conventional weapons, by assisting countries around the world with establishing effective export and border control systems, meeting international standards. To further this global mission, dap assisted EXBS with the organization of the 10th International Export Control Conference convened in Istanbul, Turkey, from the 25th thru the 27th of June 2009. This recurring conference provides an opportunity for policy, licensing, and enforcement officials from around the world to assess and confer on current events affecting the development and administration of export control systems.

Jointly hosted by the governments of the United States and Turkey, the 2009 Conference helped achieve the objective of a strengthened global export control community by promoting a dialogue among experts who are working to identify and solve emerging international control challenges, such as the threat of nuclear terrorism. Conference themes included regional cooperation on export controls, optimizing government-industry relations, and best practices concerning export control investigations and prosecutions. During the three days, the critical role of interagency coordination [cooperation] also emerged as a central topic.

The structure of the Istanbul conference was designed to maximize delegate participation by designating plenary sessions to topical presentations and by reserving day two for nine breakout sessions and reporting to the plenary. Breakout groups met according to functional area: Policy, Licensing, and Enforcement. On the third day, a closing plenary session reviewed findings from the previous day’s breakout groups, canvassed the role played by non-governmental organizations (NGOs) in establishing and practicing effective export controls, and examined various approaches to industry outreach efforts.

Digital Transformation for the State of Bahia, Brazil